A look at the trades the Panthers made today.

On paper, this is all Panthers. If paper transforms into reality, when Dale Tallon retires this will be one move on his application into the Hall of Fame as a Team Builder. I wrote an article the other day which had two targets for the Cats at the deadline and Vanek was one. Before he was traded by the Red Wings, he had 15 goals which led their team and was 2nd in points in Motown with 38. His 15 goals will rank 4th on the Panthers and 38 points tie him with Finnish stud Sasha Barkov for 2nd on this team. Vanek will likely play on the 2nd or 3rd line and on the powerplay. I think tomorrow, the Panthers play him on the 2nd line just for 1 game and sit the struggling Reilly Smith to help him regain his confidence. To make this deal worse for Detroit, they are retaining 50% of his salary which puts a $289,000 cap charge on the Panthers. While Vanek does have his struggles defensively, he is 33 and can provide offense. While Vanek has not equaled his 2006-07 campaign of 43 goals and 84 points he is still a threat. The Panthers may sign him if he does well in the offseason. Dale Tallon did a great job on this trade.

The Panthers are giving up D Dylan McIllrath and a conditional 3rd round pick. The Panthers owned 2 picks in the 2017 3rd round. If the Panthers miss the playoffs, then the Red Wings get the Panthers draft pick but if we make the playoffs the Wings get the 3rd rounder we acquired from Arizona in the Bolland/Crouse deal. McIllrath has played mostly in the minors this year. Besides a physical mentality, he didn’t bring much to the lineup although he was the only one who showed up in the loss to Minnesota in December. McIllrath will replace Reilly Smith’s brother Brendan on the Detroit backend who was just sent to the Rangers. These losses don’t hurt and the Wings could’ve gotten much better.

Thomas Vanek with the Wild from BuffaloHockeybeat.com (Left) and Dylan McIllrath with the Rangers from snyrangersblog.com (Right).

The Panthers shipped out long time AHL Goalie Mike McKenna to Tampa in another cross state rival swap for Adam Wilcox. The Panthers are getting a younger AHL goalie who will likely serve with Montembeault in Springfield next year. Wilcox is 24 and was a 6th round pick by Tampa in 2011. He is an aggressive goalie who likes to handle the puck. The Panthers are giving up a veteran who probably wasn’t going to be with the team next year. This is a slight advantage to the Cats on paper as they are getting a younger goalie.

Adam Wilcox from Newslocker.com (Left) and Mike McKenna from his first tenure with Tampa Bay from Wikipedia.com (Right)

The Panthers traded Harper, a gritty 28 year old forward to the Devils. This is another good deal. They are getting a young right shot defenseman in return. Scarlett, an offensive minded defenseman might make the team next year as the Cats will likely lose Petrovic or Pysyk to Vegas and probably won’t resign Kindl. Scarlett is still young at the ripe age of 23 and was another 6th round pick in 2011. Harper really didn’t have a future in South Florida and the Panthers brought in Scarlett. Scarlett had 21 points in 50 games for Albany of the AHL this year and will compete with Ian McCoshen, Mackenzie Weegar, Michael Downing and Linus Hultstrom for one of two possible defenseman spots in the NHL next year. He also replaces McIllrath who was playing as Springfield’s top pairing defender . 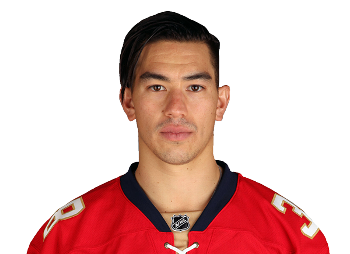 Reece Scarlett (hockeysfuture.com on the left) and Shane Harper (wchlsim.com on the right)

This was a great deadline for the Cats